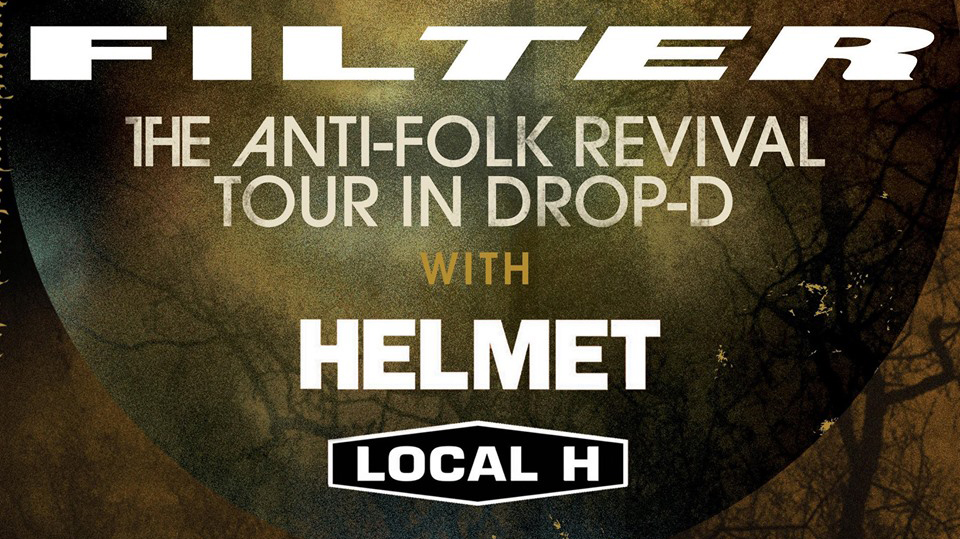 ARTICLE BY: THE PR NEWSWIRE

NEW YORK, June 16, 2014 /PRNewswire/ — ‘stache media — Filter announces The Anti-Folk Revival in Drop-D Tour with support from Helmet and Local H. The tour kicks off on June 28th at the Tail Creek Mud and Music Festival with headliners Korn, Chevelle, and The Crystal Method. Filter will be joined by Helmet and Local H for the remaining part of the tour, which takes them through major markets such as San Francisco, Anaheim, Portland, Denver, Dallas concluding in Bismarck, ND on August 23rd. Full list of date are below, with more to be announced soon.

The band is set to put out a previously unreleased track, “The Hand That’s Dealt” that will be available on July 29th through iTunes.

“Somehow what used to be heavy, punk, mean music called ‘alternative’ became a rerun of ‘Hee Haw.’ Filter, Helmet and Local-H will help you get your insanity back. Come and get a proper dose of our thick and rich guitar sounds, not a banjo. WORD!”  – Richard Patrick

“Usually we take the summers off to barbecue and go to festivals to watch other people do their job. But we’re still pumped up from our last tour and this tour looked like it would be too much fun to miss. Till the wheels come off!” – Local H

Filter released an EDM remix of their track “Surprise” reworked by Audrey Napoleon (Madeon, Deadmau5, Avicii, and Nervo) on SoundCloud and  iTunes. The original version of the track is available on the album, The Sun Comes Out Tonight available now on iTunes.

Formed in 1993, Filter has had a significant amount of success over the past two decades, and in 2013 the band released its new album, The Sun Comes Out Tonight that features the single,“Surprise.” The Sun Comes Out Tonight is available via Wind-up Records and was produced by Bob Marlette (Alice Cooper, Rob Zombie) and written by Richard Patrick and guitarist Jonny Radtke as well as collaborator Marlette.